The Dragonfish – The Black Hole of the Deep 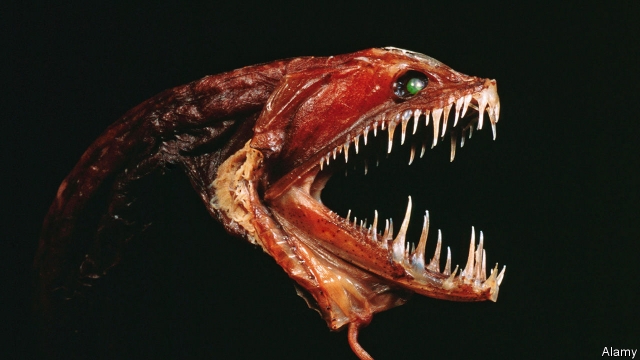 Why does the dragonfish need this cloaking ability?  It mostly spends its time in inky blackness a mile deep in the ocean, where there is no sunlight.  But there are plenty of lights down there.  Most creatures at that depth can produce their own light, they are bioluminescent  Perhaps the most famous is the lanternfish, which dangles a glowing light in front of its mouth to attract prey.  Deep sea creatures use bioluminescence to startle predators and to hunt for food.  In this environment, having the ability to absorb light and look black is helpful.

To accomplish this, the dragonfish has a skin that is as black as the blackest manmade material.  It has an absorbance of 99.9%, which means that it absorbs 999 out of every 1000 photons of light hitting it.  Its skin, which is a fragile black film, is specially engineered to do this.  It is coated with granules filled with melanin, the black pigment protein.  These granules are shaped like drug capsules to trap and absorb all of the incoming light.

Darkness and light are a recurring theme of the universe.  In the vastness of space, we have dense black holes, which trap all the light nearby.  Near the black holes (but not too near), we have incredibly bright stars.  In the depths of the oceans, we have the blackest of creatures – absorbing all light, looking invisible.  Near them we have predators – lighting up the depths, looking for dinner.  And on the earth, between the heavens and the depths, we have the darkness of night and the light of day.  And on the surface of the earth, we have humans – with both darkness and light within them, fighting for their loyalty.